Hardgrove Studio has been around for years as a private "atelier".  (I love that word!!)

My activity in the Studio represents the epitome of "mixed media" since I have worked with fiber in the weaving mode, the spinning mode, the sewing mode, and most recently the felting mode. And this last medium is what has brought me to the love of and creation of art-to-wear hats.

In 2009, I was introduced to the FeltLOOM at a conference on alpaca fiber.  In 2010, I took delivery of the machine.  And by mid-2011, I had found my niche by designing fabric to specs that most flattered several style of hats.  As the designer/creator of these hats, I must admit that I have more hats IN my head than ON my head.  The creative juices flow constantly resulting in a revolving door of hat designs.

The motivation for this latest passion comes from my mother who started me on the path to Hardgrove Studio by involving me in her Garden House Press, which I now own and operate as well.  The Garden House Press produces hand printed, letterpress notecards, stationery, and art books inspired by my mother.  The book production continues along with the felting.  One day I will merge the two in the binding process, I am sure!

In addition to the creative side of my ventures, I have raised alpacas for 20 years.  What a joy in my life!  And now I use exclusively the fiber that my animals give to me once a year when we shear them.  Though my mother did not live to see the evolution of Hardgrove Studio, I know she is with me when I am working there.  The top photo on this page was taken of her in the mid- 1980s when she "adopted" an alpaca at a fundraiser at the Los Angeles Zoo.  This photo surfaced several years later - quite a long time after I had purchased my first alpaca and after she had died.  Ironic and amazing to me!  Thank you, Mother, for your years of inspiration.  This hat adventure is for YOU.

That says it....  Now please enjoy viewing my hats.  The library of photos will constantly change.  If you want one or want to order one that peaks your interest, just let me know. 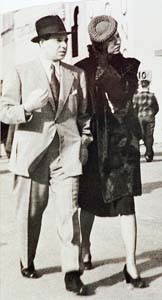